March 27, 2015July 21, 2015 Swanna
Spend it knitting, of course.
You may remember that my birthday was about a month and eight days ago.
At the time, I didn’t get any gift from my friends, because, as I have just found out, they were still deciding what to get me (but totally better late than never!).
As our friendship group is so large, it’s often easier to pool money and buy presents that are worth more to the individual. This takes LOADS of organisation. A group chat on Whatsapp is usually set up to brainstorm ideas. Then, once they decide on the presents, they have to divide up the cost among themselves and pay the people who are ordering, then actually ordering and waiting for the stuff to arrive.
The actual task of making sure that all happens usually falls to Q. She did it a few times and now the duty is kind of stuck with her, so she gets a special mention for always doing it (and doing it well, might I add) as well as AT for helping to pick out the stuff.
So they wanted to give the stuff to me together over morning break in the common room but I wasn’t even there. By some weird twist of fate I had just decided to join E at the canteen on the other side of the school. My friends were worried. We’re not ones to go to the canteen during morning break, so when I saw three of them in the distance, holding smallish packages and crying ‘THERE SHE IS’, I put two and two together pretty quickly with a gasp. As AT said later ‘we’re like your three wise men. We come bearing gifts!’ (Well, it was funny at the time.)
This is what they got me: 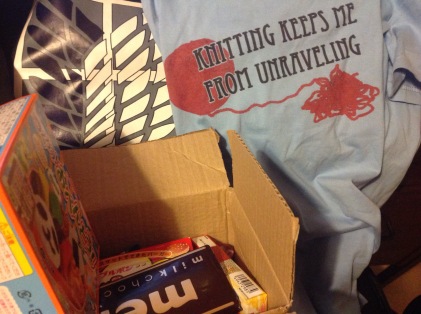 For the record, I love zip hoodies. They’re easier to put on and off when I feel like it, and they’re really comfy. Until today, I only owned one – a worn in, maroon ‘chilli pepper’ hoodie that used to be my mom’s a decade ago. Now I have new, very soft and comfy Attack on Titan hoodie (great anime, go watch it). I am wearing it as I type. I may well just live in this hoodie for the Easter Holidays (and finally give the other one a spin in the wash!).
I also love knitting, but I have no knitting merch. I’ve just ordered a bag from a Young Enterprise company in school who do custom tote bags – of course mine has a knitting design – but nothing else. This T-Shirt (squeal, it’s perfect!!) and the tote will be the beginning of something, I’m sure… A mug next time, perhaps? 😀
I also love sweets. I eat them in moderation now, but I love sweets. I also love cute Japanese things, but I didn’t expect a box full(!!!!!) of Japanese candy. It all looks delectable, especially the infamous Green Tea KitKat… Who am I kidding, Panda Pocky, FTW!!
But of course, before I eat it all… I want to learn what the packaging says!
X
P.S. I think I could cry now. Thank you so much to everyone who contributed (or didn’t, but wrote in the card anyway… You know who you are!). You guys are weird, wonderful and clearly the best people I know. (xoxoxox)
P.P.S. The THIN PLASTIC bag you gave me the hoodie in was being used to carry all the presents. It already had a hole in it and it split open just as I was about to leave the Archery Club. I think the club gave me their last plastic bag, phew.
P.P.P.S. I’m glad I warned you guys beforehand of my T-Shirt/Hoodie sizes. Crisis averted.
P.P.P.P.S. The post looks a bit chunky. Wierd, I’ve edited it so it isn’t but the ‘enter’s are not showing up?