Ever since highlighting took the makeup industry by storm I have refused to step onto that particular bandwagon. I usually join in on hyped bandwagons really late and this one seems no different, but really it’s extra special,  because… I have oily skin. Shine is my natural enemy. I powder my face to bits because I know at the end of a work shift I’ll just shine! So I avoided this trend, but recently highlighting has just been calling to me and I finally thought, well this one is only £3 and it can’t hurt… 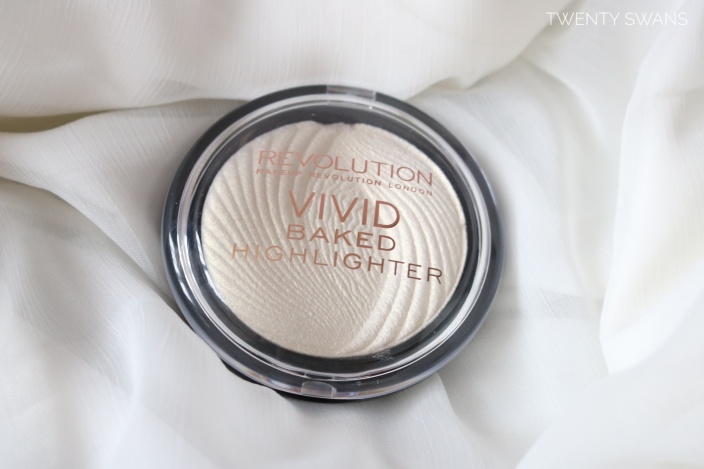 Makeup Revolution’s Vivid Baked Highlighter in Golden Lights is packaged in sturdy plastic with a clear lid. Nothing mind-blowing, but not downright terrible either. The design of the actual powder helps it, though. It actually looks pretty good for a product at that price point.

(Hey! My photos got better! I’m hella proud of these pretty shots.)

With the swatch below, I don’t think you can see the shimmer all that well. Swatched using my finger, I flattened some of that cool pattern on the powder, and it did come out a bit glittery rather than as a highlighted shimmer. However, with a brush on the cheeks, this shows up so subtly and not as chunky glitter at all. It’s hard to go overboard with this and the sheen it leaves is definitely gold rather than a white highlight. 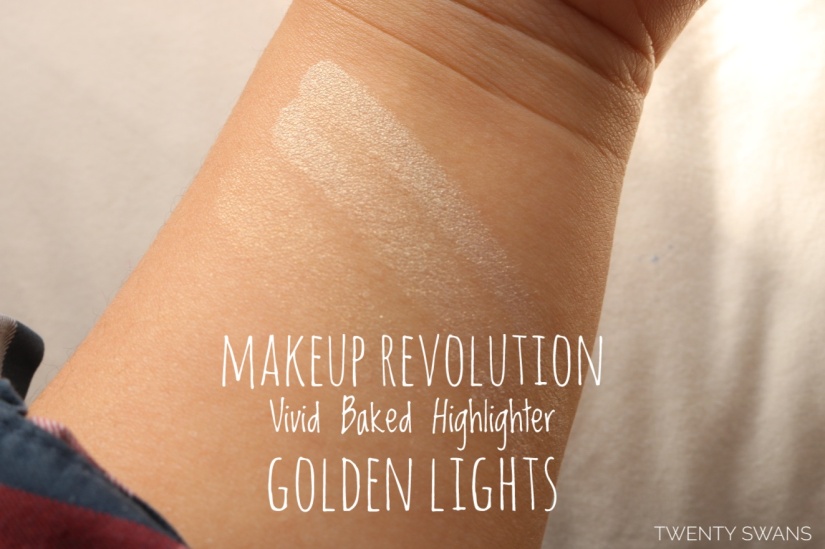 You’d think that perhaps my skin in its oily stages would completely mask this highlighter by the end of the day. I dare say that anyone who isn’t familiar with highlight probably wouldn’t notice the difference. However, when I tried wearing it all day, a fellow makeup lover noticed the gold sheen even after I turned into an oil slick and I am genuinely baffled as to how, when all my (matte) makeup sort of melds together and looks glossy.

I think this highlighter has powers I just don’t understand.

Would I recommend this? I actually do not know. For anyone who has normal, not oily skin, I’d say give it a go for the glow! If you’re oily skinned like me, I am still figuring out whether I should have bothered. Personally, I think this was a bit of a novelty, hype-induced purchase.

Let me know what you think of this, if you have it!