Despite the makeup I have, I don’t do a base and eyes all that often. A full face is reserved only for special days, like a concert. I took out a lot of items I hadn’t been using for a while and got to play around with my look a bit. Today’s chatter / extra post is basically about what I wore and how it wore throughout the day! Also, some extra gushing for obvious reasons.

Before we begin, I obviously have to mention that my skin is oily and I wore all of this for 12 hours straight, with only a minor top up at about the 6 hour mark for some items.

(The cat ears, earrings AND the comfy grey turtleneck are all from New Look. What is it with me and my attempts to look cool? I TRIED, OKAY? Also, what do you think of the hair?? I’m still undecided!!)

Etude House Proof 10 Eye Primer – all over the lid and under the outer corner too.

Makeup Revolution Neutrals VS New-trals Eye Palette – shades Trend on the inner half, Suit on the outer half, Strong in the outer corner) (Speaking of which, I want to re-take the photos from that review soon. Sure, my palette is less than perfect now but I’m not entirely satisfied with the photos of that palette…)

Kat Von D Shade and Light Eye Contour Palette (Laetus as a base, Saleos under the outer corner, Shax right at the corner and to help smoke out the eyeliner just a teeny bit.) (Note to self to re-take photos for this post too!)

CLIO Salon de Cara Back Comb Long and Curl Mascara – Held my curls all freaking day, although I think my tube is getting a bit old and dry. I guess I should re-buy it soon if it’s still available.

Notes – My eye makeup looked EXACTLY the same as it did when I applied it. The shadow does rub off a bit but the CLIO liner is still steadfast. There is only one (1) minor crease on my right eyelid where some darker product migrated. My eyelid doesn’t even look shiny. You wouldn’t think they were oily at all. What is this magic??

I even teared up a bit when Paramore played Ain’t It Fun (and nothing smudged). That song is essentially my happy anthem, my hype anthem. I don’t know why I always cry at concerts. Maybe it’s because I just never thought I’d get to go to any.

(Here is your obligatory crappy gig photo from my phone. Taken during Hate To See Your Heart Break)

Maybelline Age Rewind Concealer in Light – All over the centre area of my face! It used to be too light for my skintone (and thus, a highlight shade) but now it’s pretty much a perfect match.

Innisfree No Sebum Powder (to set) – using a powder brush

Jolse Blotting Sheets (to top up later) – Often given out as a freebie when purchasing from them, I like these as they aren’t powdery. However I find myself using more than one to blot my face. More like two or three.

Notes – I used to have issues with the primer as it often would go patchy and cause my makeup to pat off instead of staying on my face. This time, I had new cushion puffs (my preferred way of application) to replace my old ones. I spread a very thin layer of the primer on (I used to do thick layers), sprayed a little of La Roche Posay Serozinc on the puff (I’m just trying to use it up) and tapped the concealer out very very gently.

I was obviously very shiny at the 6 hour mark despite Innisfree’s No Sebum being my favourite powder to date (the record is about 3 or 4 hours before I get shiny) so this was inevitable. At the end of the 12 hours, there were noticeable breakdowns on my inner cheek and nose and a bit on my upper lip. Estee Lauder Double Wear does not break down below my nose as gracefully. Just sayin.

New Look Pure Colour Lip Liner – this liner is from just before New Look revamped their makeup line, so I don’t think you can find it anymore.

P.S. Black Lip Liner – Primark makeup was (well, it sort of still is…) quite inconsistent in its lineup. Either they had the colour you needed, or they didn’t. It was hard to find a black lipliner back then so I snapped this fast.

NARS Train Bleu – I love the NARS Velvet matte lip pencil range, although if I had to say there were duds, this might be one of them. But look – if you’re okay with wearing this dark lip for no longer than a few hours it’s fine. It showed noticeable gaps in my lip lines by the 6 hour mark and I had to reapply with a lip brush. 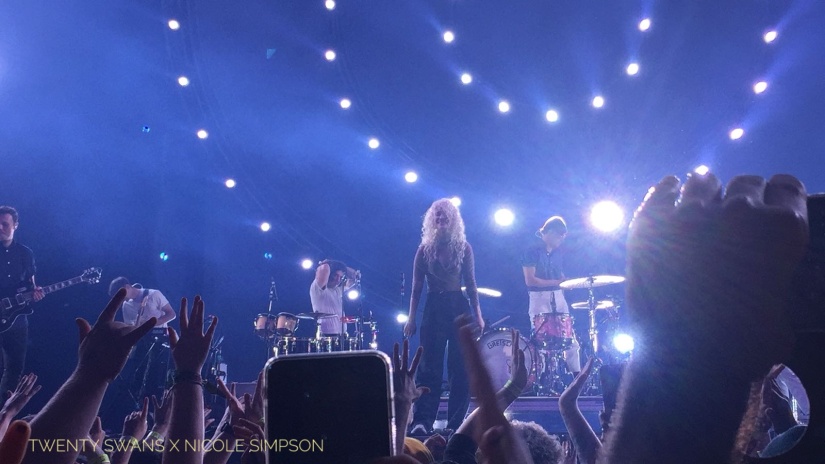 This photo above was taken by my friend, Nicole. As you might be able to tell I’m not exactly a fan of trying to stand at a concert with my height…

Actually, now that I am thinking about it, I don’t really have much to say about the concert itself! Hayley Williams is a total sweetheart (nothing new) and I had an amazing night and really enjoyed myself. If I’m going to be super honest, After Laughter is not my favourite album of Paramore’s (although I adore Told You So TO BITS!) but it’s an album I just like to play as a whole for the mood and jam and be happy to. Most of the songs from the set were from the album so it was just a happy night and really lifted my mood!

12 thoughts on “[Makeup and Chatter] Paramore in Birmingham”