I don’t know about you, but I’m really enjoying this unintentional ‘Makeup and Chatter’ series. I get to talk about a good day with nice memories at a place I haven’t been to before, as well as share a makeup look. Oftentimes posts with only the former don’t do so well but I really do enjoy writing those so I’m glad I’m finding a way to keep them going. Also, I can’t keep these photos languishing in my computer folders forever.

The Botanist is a bar and restaurant which, in Birmingham, is tucked away on Temple Street, off New Street, just around the corner from Tesco Metro and a bit further up than Ryman’s. I didn’t even realise that it was a place you could eat – it’s one of those places easily overlooked, I think.

The bar has a glass ceiling part (I’m sure there’s another word for it…) which lights up that area quite well for photos, including this gorgeous coloured centrepiece I took a few snaps of, but otherwise, the restaurant is ambiently lit and very cosy. We went in just as it opened and it was still pretty busy for the lunch period as far as I could tell. As orders were taken and the restaurant leapt into action the smell coming out of the kitchen was divine. I stopped regretting skipping breakfast (by accident) right away.

I ordered the Berry Good Times Mocktail and the Butternut Squash, Goat’s Cheese and Mushroom Pie. It was a really nice comfort meal and I totally stuffed myself. The hanging kebabs looked fascinating, though. Maybe next time! I can never make it through a two course meal unless the portions are really small or I am especially starved… Is it just me? Otherwise I would have totally gone for dessert.

I finally gave my friend her Christmas present, a handmade hat like this one but in a different colour scheme, dark green and grey. I might do another post on it. On the other hand, she gave me a few packets of instant miso soup which taste really good and can’t really be found here. We spoke about a lot of things over lunch, like makeup (okay, that part of the conversation was mostly me) and boys (also me, but not normally my conversation topic of choice) and general facts about each other.

The thing about making new friends now is that there’s a breadth of past and potential to talk about as we get to know one another. She’s already finished her year of study here and moves back home soon and I will miss her to bits, as she was actually one of the first few friends I made at university, too. 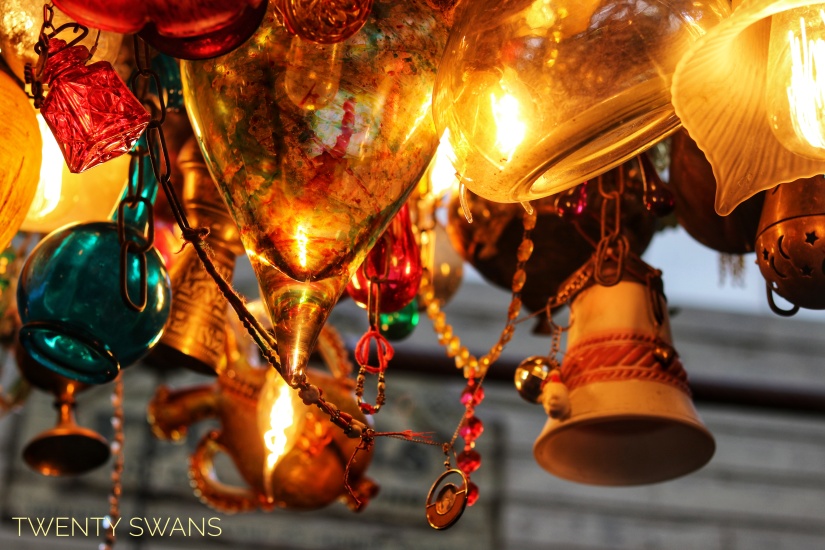 Her birthday was yesterday and I hadn’t figured out what lipstick to buy for her (I am living my lipstick-buying life vicariously) so we popped around Selfridges, got sucked in by the lady at the YSL counter for several minutes, and ended up popping around MAC and picking a satin nude shade. We also popped by a NYX stand and I spotted a Soft Matte Lip Cream in Stockholm on sale for £4 (it’s on my wishlist for after I finish a certain other product) and I had to tear myself away from the counter, ASAP. In hindsight, that was pretty funny.

I had a lecture in the morning so I couldn’t go completely overboard with the makeup. I did end up a little late anyway (this isn’t usual of me! Don’t worry! I’m normally twenty minutes early!!) but this was because I made the over-excited last minute decision to add false lashes. Yeah, I don’t know what I was thinking either.

I practised last night and it went okay, but that meant nothing this morning. It took me two attempts and then, not being used to using eyeliner with false lashes, the lashes got in the way and my eyeliner wasn’t so great. But I let that pass. Some makeup mistakes nobody else will really notice and this was one of them. The other was that my falsies were uneven.

The weather decided to turn bad just as I began to take photos but I persisted!
It got so dark in the space of two minutes, I was shook.

Eyes
Etude House Proof 10 Eye Primer
Kat Von D Shade and Light Eye Contour Palette
Shades Ludwin, Succubus, and Saleos
CLIO Kill Black Brush Pen Liner
Shu Uemura Standard Eyelash Curler
(These are only on trial at the moment but so far, I love them.)
Eyelure Naturalites False Eyelashes
(I can feel them on my eyelids but they’re not uncomfortable, although I put that down to my inexperience. I’m sure these are an old pair, the packaging is different but this box has been lying around unopened for years, I tell you)
Urban Decay Troublemaker Mascara

Base
Maybelline Age Rewind Eye Eraser Concealer in Light
Innisfree No Sebum Powder
(Note to self – base was already breaking down by the three-hour mark.)

I never really use eyebrow products these days… I’ve been wanting to try out some eyebrow mascara type products like Boy Brow and so on but my fringe covers my brows, and my brows themselves are thankfully nice if not needing a bit of tidying from time to time.

But anyway, that’s what I got up to today. My exams are over and I’m back in the full swing of uni and part-time work. I hope you’re all doing good!

5 thoughts on “[Makeup and Chatter] Lunch at The Botanist”