When I first sat down to write this I was thinking that this would end up being a very long post. This was because it seemed like my TBR pile had finally reached the heights of my G-Dragon poster. Then I realised that I could split the pile somewhat. I tend to leave my current reads on top of this pile too, you see, as well as some other stray books.

Anyway, after splitting the pile into my abandoned reads and actual yet-to-be-touched books, I thought I would show you the books in the latter category.

But then after that… This post was originally scheduled for February but my birthday recently passed by and I got a few more books as gifts…. making this a very long post. Whoops.

Lord of the Flies by William Golding
About: A group of young boys crash land on an island and have to fend for themselves.
Goodreads

This has been on my TBR for a while. As a lover of the Battle Royale, I think the original plan was to self-study these books together alongside other books of a similar premise, like The Hunger Games and The Long Walk. It never really happened, but I still want to read this again. I’m sure I would at least appreciate it more than my thirteen-year-old self did.

The Bone Season by Samantha Shannon
About: A dreamwalker and clairvoyant hired to break into people’s minds for information.
Goodreads
I’ve heard so much good about this series but wasn’t sure if it was for me. The book itself is pretty stunning, though, and I thought about it a lot. I was really surprised to find it in a charity shop a few weeks ago with an unbroken spine and snapped it up straight away! £2.50, everyone. What a deal!

I spied some Murakami and other big titles that day, too, so it really goes to show that charity shops are always worth checking out. I’ve spotted everything from hardbacks of The Girl On The Train to the entire Song of Ice and Fire series in such stores. Did you know my entire Harry Potter book set was second hand in this way? In fact, I think half my bookshelf is second hand!

I See You by Claire Mackintosh
About: A woman becomes the target of possible horrible crimes after her photo is revealed in a newspaper’s classified ad.
Goodreads
This is a book gift from Tray, and it’s a thriller. I don’t normally read this genre but it sounds good and I’m looking forward to shaking up my reading a bit.
The Hate U Give by Angie Thomas
About: A girl caught in the whirl of a close friend’s death at the hands of a police officer.
Goodreads
Does this book even need an introduction? It’s probably the most recommended book of 2017 as I just did not stop hearing about it, and I picked this up at a The Works store in Colchester, for £3! Only… that was in October or November and I’m ashamed to say I still haven’t touched it.
The Young Elites Trilogy by Marie Lu
About: A survivor of a deadly fever with emerging powers.
Goodreads
This was also picked up at The Works, but one in my city. They do some great discounted box sets and I’ve been mulling over getting the Poison Study (Maria V Snyder) box set for a while, too. I’ve heard lots of good things about Marie Lu so I’m eager to start this series.
Great Expectations by Charles Dickens|Goodreads
Jane Eyre by Charlotte Bronte|Goodreads
Two classics here, bought where else but a charity shop? I’m not as hyped to read these but I’ve always been meaning to read them so I expect I’ll get around to it at some point. Not that I hate classics, I’ve enjoyed a few before but they’re just less exciting to pick up, initially!

I’ve just finished Golden Son, the second book in the series, and I may leave it a while before I finally finish this trilogy. I am really enjoying it so far, though.

The Cuckoo’s Calling by Robert Galbraith (J. K Rowling)
About: A detective is tasked to solve the apparent suicide of a model.
Goodreads

Another charity shop find from more than a year ago, I simply haven’t found myself in a rush to read this. 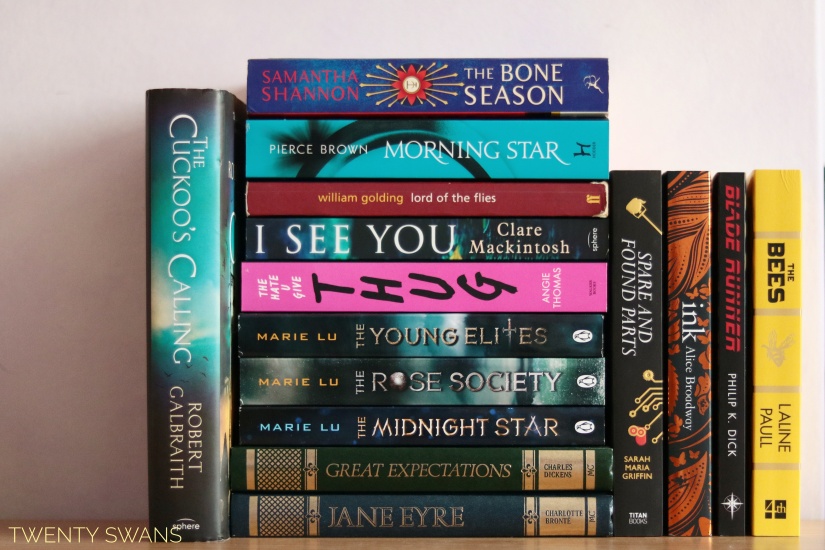 Blade Runner (originally ‘Do Androids Dream of Electric Sheep?) By Philip K. Dick
About: A bounty hunter is tasked to retire some rogue androids.
Goodreads

Renamed for the infamous film and recent cinematic remake, I first spotted this in Foyles before meeting a friend, before then finding it in The Works for £2, of all places!
Ink by Alice Broadway
About: A girl’s father dies and his tattoos, his life records, to be made into a Skin Book only there is something missing from his.
Goodreads

Following on from the last book, The Works also often offer 3 for £5 on their books. Normally, the store in Birmingham City Centre doesn’t have a selection to my taste but when I spotted these two books, I was so excited! AT was with me and also wanted a copy of Blade Runner so we were able to pick up the books for £5 together!
The Bees by Laline Paull
About: A bee of the lowest caste in the hive breaks a sacred law.
Goodreads

This was a birthday gift from AT, and is pitched as ‘Hunger Games’ meets ‘The Handmaid’s Tale’. The concept sounds really interesting and this isn’t just human dystopia with a bee concept – all the characters are bees! The cover of this particular edition is really bright and attractive and adds some much-needed colour to my TBR pile.
Spare and Found Parts by Sarah Maria Griffin
About: A girl strives to create her own companion out of the mechanical parts that every human in her community has.
Goodreads

This was a birthday gift from Twerp. It went straight on my wishlist after I had seen it floating around my twitter or something and I fell in love with the new paperback cover, with red sprayed edges!

Clearly, I need to make a start on this pile, but I really can’t help myself when it comes to buying books. I’m trying to make more room for reading this year, with the aim of at least a book per month for my Goodreads challenge.

What is your reading challenge goal this year?